The pillar post box at Macalister Road, the oldest so far? 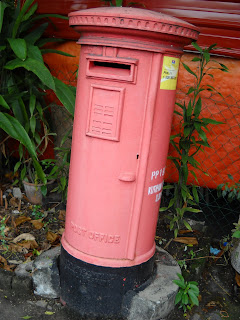 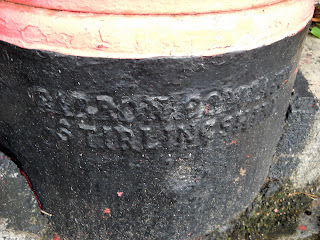 The writing at the base of the pillar post box, can anyone read it? 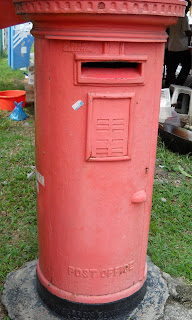 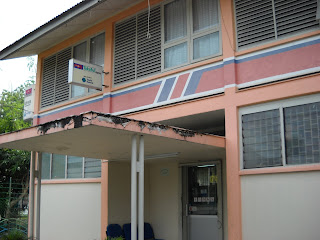 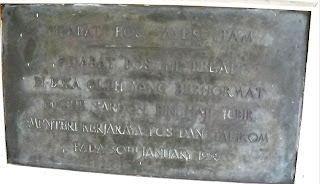 The commemorative plaque with the inscription that the post office was open by the Minister of Post and Telecoms, Encik Sardon b Haji Jubir. He was later the governor of Penang, and become Tun Sardon.

I found another two pillar post boxes in Penang...

Both are located in Air Itam area, one is in front of Post office Air Itam, at Jalan Air Itam near the Hindu Temple on the way to Air Itam town. The post office was opened on 30-1-1958 by the Minister of Post and Telecoms, Encik Sardon Bin Haji Jubir(noted without the title of YAB,it is called merely Encik or Mr in 1958, one year after independence). This postbox probably was erected in 1958 or after independence in 1957.

The other one was found in front of my great uncle's house(kun-shu-kung), where during my childhood days I used to visit his house. He was a nice elderly man to me, as I do not has an old grandpa, he seems to be like a great grandpa. He is my grandpa's youngest brother and I love to visit his house. His house is an attap house near a coffee shop.He was good in kungfu as my auntie told me.He was one of the early photographer and owned a photo-shop before the WW2 at Chulia Street/Leith Street corner. A brother of famous pioneer artist. The discovery of the post box, led me again to visit the old atap house. He had passed away, the house is still there. I still remember the great uncle sitting at the corridor of the attap house, wearing the Malay sarong, speaking the Hakka Daipu dialect...... (I remember he smoke pipes, if my memory did not fail)

The post box is just in front of the house,near the bus stand. Just across the road infront of Chung Ling High School. The pillar post box is similar to the one found at Air Itam Post Office. At the base of the pillar post box, there is some writing, which I cannot read clearly. It may be erected there after WW2. May be the same year as the one found in front of the Air Itam Post Office.

This indicated that the post box at Jalan Macalister is the earlier; and need to be protected as heritage item for our younger generation. May be it need to moved into the building's compound.

There is another pillar post box in China Street Ghaut, which bear the royal cipher of Edward VII, which means it was erected between Jan 1901- May 1910( refer to http://ssquah.blogspot.com/2007/11/china-street-ghaut-penang.html)

Anymore other pillar post box in Penang?
Posted by Boon Raymond at 9:58 AM