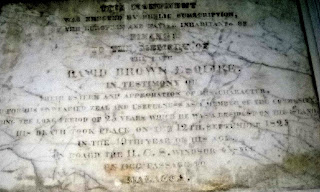 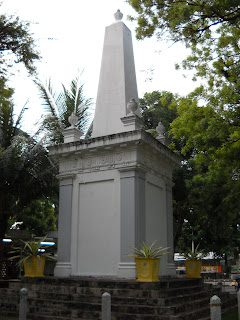 ( The memorial of David Brown)


David Brown, a Scotsman from Longformacus, a small village in Berwickshire, Scotland. Born in 1778. He studied law in Edinburgh, but went into business with his fellow Scotsman, James Scott, who come from the same village. James Scott is the trading partner of Capt Francis Light, who took over Light 's estate after he passed away in 1794. After James Scott died in 1808, David Brown took over his estate, and become the largest land owner in Penang. He married a local wife, Nonia Ennui, and second wife called Inghoo. He died on 12-9-1825 while on board the vessel with the name H.C.S. Windsor Castle, on his passage to Malacca.

The first Penang were founded soon after the establishment of a trading station by the East India Company in 1786. The attention was given to the growing of nutmegs, cloves, and other crops of commercial value. In 1794, the Company appointed Christopher Smith as Botanist to Penang to establish the spice gardens on . Smith, who had originally trained at Kew Garden, planted a small garden of "20 orlongs" [10.5 ha] in 1794 in the middle Ayer Itam valley and a larger garden, of "300 orlongs" [158 ha], at Sungai Keluang. The exact location of both gardens is unclear.

By 1800 there were some 1,300 nutmeg plants in the two gardens(Ayer Itam in 1794, & Sungai Keluang), with Sungai Keluang now predominantly growing pepper plants. That year, a delivery of a further 15,000 clove and 1,500 nutmeg trees together with Canary Nuts and Sugar Palms arrived from Ambon Island. The size of this delivery led to the enlargement of the Ayer Itam gardens and Residency grounds; as a result, Smith was instructed by Lieutenant Governor Leith to return to supervise this enterprise and cease collecting further specimens in the region.(ref: Penang Botanic Garden, www.wikipedia.org)

1805- Colonel Robert T. Farquhar (1776-1866), who succeded Sir George , sold the Garden's contents at 12 days' notice for $9,656. Most of the specimens were removed and replanted elsewhere by various purchasers. James Scott was one of the two biggest buyers.

1806- David Brown, a partner in Scott and Company, established spice gardens in the area of Sungei Gelugor, in the area of MTC and USM today. David Brown used capital borrowed from Scott and other friends to clear a part of the hillside at Gelugor , about 8 km from , for pepper and nutmeg planting. Along side this he experimented with new commercial crops

1808- James Scott involved heavily in James Town project(now Bayan Lepas)at Sungei Kluang , opposite Pulau Jerejak, believed that the place will be earmarked for naval base by British government. But it was not materialized. James Scott lost in his investment, and declared a bankrupt. David Brown took over Scott & Co. James Scott passed away in 1808. David Brown took over the business of the Scott , Brown & Co(where he was the partner) , the company become Brown & Co. David Brown become the largest land owner in .

Some of James descendants married into the Brown family from and Longformacus ,this revealed the closeness of the 2 families, the relationship of James Scott and David Brown by marriage.

1810- He was the first private planter who cultivate nutmeg extensively in his estate in Penang. James Low in his book, A Dissertation on the Soil & Agriculture of the British Settlement of Penang, published by Singapore free press office in 1836, pg 19. stated that “ He stood alone in 1810 as a spice planter on extensive scale”.He continued in Pg 20, “George Brown managed the estate with spirit and judgement, which finally overcome every difficulty, and displayed for the first time , after 30 years of precious trials,the full value of pursuit.”. George Brown was the eldest son of David Brown, who contrinuted much to the cultivation of nutmeg.

The Gelugor House, the large square mansion in the Gelugor Estate was built by David Brown in 1812.

There was a book ,with the title "Nature and Nation" pg 35; writing about the time Glugor House was built;

David Brown ‘s Glugor House, nestled salubriously among spice gardens, mainly pepper. ….. the landscaped gardens surrounding the well -styled stately homes of emulated the country house of the English gentry. The residence of Scott, set within the cool hills,with the commanding views and conveying reminiscences of home was dubbed “ The Highlands of Scotland”.These visible changes in the landscape markled the steady transition from a pioneer phase of speculation, hardship and instability , to an era of greater prosperity, permanence, comfort and elegance. 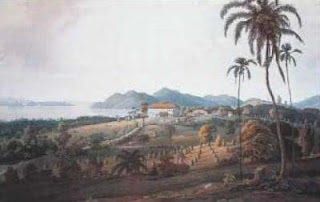 - He was in the committee that found the Prince of Wales Island Library(now Penang Public Library) in 1817. He was treasurer, and R. Ibbetson was the librarian. The library however at that time it is restricted to British residents only.

1818 - The bearing nutmeg tree in the island was estimated to be 6,900 trees,since the period nutmeg has been extensive cultivated. The eldest son, George Brown was the one who planted netmeg in larger scale, the first estate in Malaya.....
1821 - Raffles urged David Brown to assist the visiting botanist, James Pott to collect samples of the island’s edible plants and fruits to improve the understanding of its botanical wealth . He was a gardener from London Horticultural Society.(ref: Letter from Raffles to Brown dated 20-6-1821)

1824 - In 1824, MrBrown attend the first service of Mission Chapel, together with Scott,(not James Scott, must be 2nd generation Scott), Mr & Mrs Clubley. Mrs Andeson. ( note: William Clubley was the Resident Councilor of Penang from1825-1826).

1825- David Brown passed away while on his voyage to Malacca.

He was a philanthropist, who donated 12 acre of land at Dato Kramat Road to the local municipality. The place is know as Padang Brown(Padang Datuk Kramat), it is bordered by Johore Road, Datuk Kramat Road, Perak Road and Anson Road. It was once popular for football matches, but now popular as hawker centre. The Johore Road is now popular hawker centre. At the corner of Anson Road and Perak Road, there is a memorial in memory of him. It was previously at the centre of Padang Brown, but now at the corner , at the centre of the hawker complex.

It reads: "This monument was erected by public subscription by the European and native inhabitants of Penang: To the memory of the late David Brown Esquire in testimony of their esteem and approbation of his character and for his unwearied zeal and usefulness as a member of the community during the long period of 25 years which he was a resident on the island. His death took place on the 12th September 1825 in the 49th year of his age on board the on her passage to Malacca."

The Brown family only enjoyed the benefit of nutmeg cultivation in 1836, when the nutmeg trees started bearing, and the price of the spices were good. The senior David Brown had passed away in 1825, David Wardlow Brown(David 2nd Son) enjoyed the benefit, reported in possession of Stering pound 10,000 a year, a huge sum in those days( ref: NST 15-11-1993)

1) 1st son: George Wilson Brown(1805-1846), who was the one that help the father in the spices cultivation. He expand the cultivation.

The forth daughter of the late Forbes Scott Brown, Esq of Longformacus, Berwickshire, Scotland and of Glugor, Penang. She married to Sir John Alexander Cockburn, MD, KCMG(23-8-1850 to 26-11-1929), who was the Premier of South Australia from 27-6-1889 to 18-8-1890. They married on 13-5-1875. Sir John Alexander Cockburn was the first doctor to be the premier of South Australia. She was the founders and first President of National Council of Woman of South Australia, the inaugural meeting was held on 1902, Sept.(ref:Ever yours, CH Spence; by Catherine Helen Spence, Susan Magarey, Barbara Wall, Maryan Beams, Mary Lyons, Pg 198).

9)John Robertson Brown,who was the Penang jurors in 1904, an assistant in David Brown & Co, Glugor.

11) Edmund Brown, it was mentioned in the book